Raymond Handling Concepts Corporation, a leading material handling equipment supplier, was holding its annual auction for one of its hand-driven forklifts – but this was no ordinary “pallet jack.”  In honor of breast cancer awareness month in October 2015, Raymond painted a pallet jack pink in honor of survivors everywhere.  During a dinner with friends, company founder Steven Raymond was introduced to a woman who had recently created a charity in memory of her sister and was planning a golf tournament. Raymond was so impressed, he decided to take action and the idea of the pink pallet jack was born, benefitting the Tina Turner Memorial Foundation and Northwest Hope and Healing Foundation.  Raymond retained Master Plan Communications and challenged the PR agency to increase awareness of the Pink Pallet Jack and auction.

Through implementation of the MPC PR campaign, the event generated 19 feature media placements on the fundraiser, including placement in both local and regional press and national material handling trade publications. The Master Plan Communications team secured a total of 85 print and online media placements surrounding this campaign.

Never before in its history has Raymond Handling Concepts Corporation gained this much media attention and public exposure nationwide. Based on MPC’s digital analytics reports, the total number of online followers, print coverage through placements and wire distribution, and social media/web visitors was more than 18.4 million.   Also impressive, was the final amount raised for local breast cancer charities that totaled $6,915 as well as the balanced coverage results between local, trade and national news media.

“Giving back to the community is a value that is important to Raymond Handling Concepts Corporation. We believed that MPC was the agency to help us generate awareness that would raise funds for breast cancer charities,” said Simon Walker, Vice President of Raymond Handling Concepts Corporation.   “The MPC PR team went above and beyond the measurable objectives set and we feel the PR campaign they implemented was a complete success.” 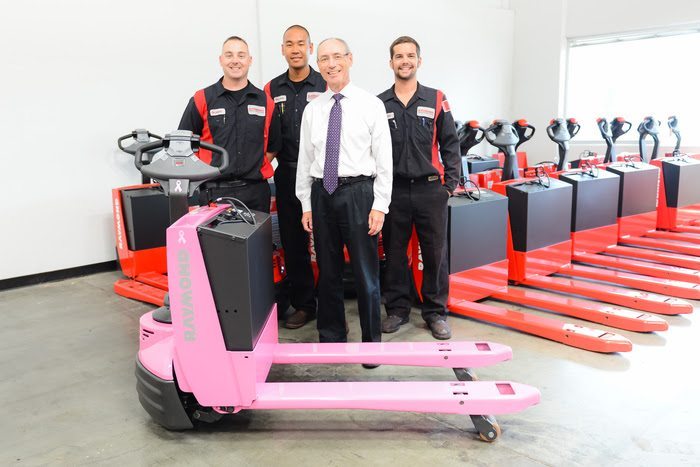